SUBSCRIBE NOW! Don't Miss Anything We Post. Join Our Email List Today.
Home
News
Paul Long: 58-year-old Bob Platt has run a marathon in every state in the union — and every continent

The distance between Louisville and Frankfort is 50 miles.

Back in the day, when they used to run an official, if small, ultramarathon between Kentucky’s largest city and its state capital, Bob Platt raced it. Although the distance is almost double that of a regular 26.2-mile marathon, Platt counts it as his Kentucky marathon.

And that helps him achieve an unusual distinction. Over the span of his running career, the 58-year-old Platt has run a marathon in every state in the union.

Not only that, but Platt has run a marathon on every continent. If you don’t know your geography, that’s seven continents by the way we count them, including Antarctica, the frozen land at the South Pole.

All told, Platt has run 134 marathons, and 24 ultramarathons, mostly 50-milers. His goal now? To do another round of marathons in all 50 states. He’s up to state 17 in his second go-round.

“I love running, and I love travelling,” said Platt.

“When I grew up, I realized I could combine vacations with my hobby. When I run a marathon on my vacation, it’s addicting.”

Platt, who lives in the Oakley neighborhood in Cincinnati, said he’s been running his entire life. He grew up in Youngstown, where he first joined the track team in seventh grade. He ran cross country in high school and college.

When he first moved to Cincinnati to start working at an IT company shortly after college, he joined a running club so he could meet people. Running was then in its first explosion, but marathons were still an enigma to most people. Ultra-marathons were even stranger, being run, if at all, by a small, select group.

So during his early runs in Cincinnati and through the streets of Newport and Covington, a couple of new friends encouraged him to sign up for the newly formed Columbus Marathon. He did. He was 23 years old, and that would be his first marathon.

“I don’t think I even knew back then what a marathon was, or what it took to run it,” he said. “I knew the distance, but I had no idea what that meant.” Still, he ran his first official marathon in just over four hours, a respectable time.

“It was OK until the last few miles,” he said.

He started running more than one marathon a year, and eventually, ran a few ultramarathons, and there was no going back. He heard about people who run in all 50 states, and he couldn’t resist. “I said, let’s go for it,” he said. 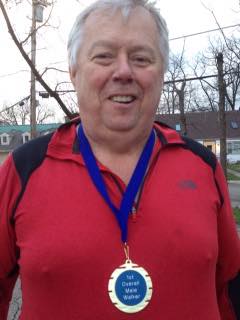 And not only has he run a marathon in 50 states, he’s also volunteered at a marathon in each state. His Kentucky volunteer effort was his first, at an old marathon that took place along Ky. 8, starting in Ludlow, which was put one a while back by a YMCA group.

His 50th running state was South Dakota, at a marathon in the small but historic town of Deadwood.

Then he started to explore the seven continents. (Yes, that is a thing. Indeed, earlier this year, Becca Pizzi of Belmont, Mass., became the first woman to run the seven continents — in seven days. It’s called the World Marathon Challenge. She won.)

His first marathon outside North America was in Antarctica. That journey included a trip to Argentina, then a ship ride across the Drake Passage through the Shetland Islands and along the Antarctic Peninsula to King George Island, which is off the tip of the peninsula.

Because the race occurred in the middle of February, during the summer in the southern hemisphere, the course was muddy and snowy, and not a pure sheet of ice. Indeed, Platt and others ran on mostly dirt trail roads.

“You ran back and forth four or five times between the different research facilities on the island,” he said. “We ran a little bit on a glacier. But mostly it was on mud roads.

“It was beautiful. One time, we couldn’t get down a road because a seal was blocking it. But he eventually moved, and we could get by.”

Another memorable marathon was in Asia, which took place on the Great Wall of China. Currently, an official marathon takes place on part of the wall at Huangyaguan, Tianjin, China, but that’s not what Platt ran.

Instead, he said, his marathon took place entirely on the Great Wall, which included stairs. The first time, he did not finish the race. He did the second time around.

“I knew what they meant by being prepared to run a lot of stairs,” he said. “It was mostly all stairs. One was like a ladder.”

His South American marathon was on Easter Island, famous for the Moai, or carved human statues. That race basically ran on a road from one end of the island to the other, he said.

“You’re in these places that you have only seen in National Geographic magazine.”